Recipients of Awards at BizAvIndia Awards 2016 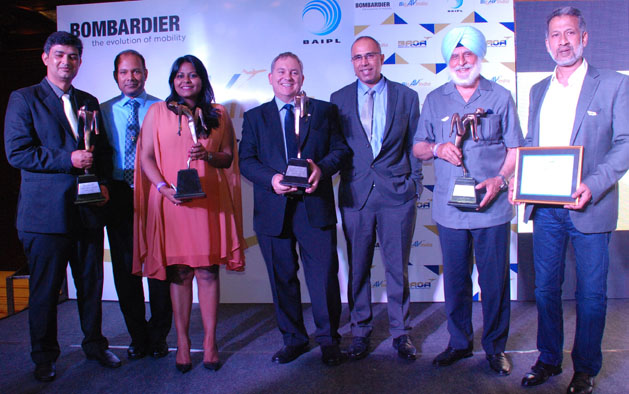 The awards were presented at a glittering ceremonyin the presence of an august gatheringof aviation industry doyens, dignitaries and crème de la crème who had gathered in Hyderabad for the India Aviation Conference & Exhibition 2016.

The BizAvIndia Operator of the Yearaward went to Global Vectra Helicorp Limited in the large fleet category and Poonawalla Aviation Pvt. Ltd in the small fleet category, which was based on quantum of flying, complexity of aircraft and operations, safety record, humanitarian effort and other parameters.

The BizAvIndia Award for Innovation was given to JetSetGo Aviation Services Pvt Ltd for their works towards expanding business aviation markets and improving efficiencies through use of internet.

The BizAvIndia Hall of Fame was bestowed upon Capt. SS Majithia, Chairman, Saraya Group; for his relentless contributions towards the growth of India’s Business & General Aviation sector. A special recognition was conferred to Mr. Ravi S Menon, Executive Director Air Works India (Engineering) Pvt Ltd for meritorious service to the industry over 45 years.

Expressing his thoughts on the occasion, Mr. Jayant Nadkarni, President BAOA, said ‘It is heartening to see such positive response to the second edition of BizAvIndia Awards. They have brought the focus on operational excellence for an industry which is wrongly perceived as an indulgence.’